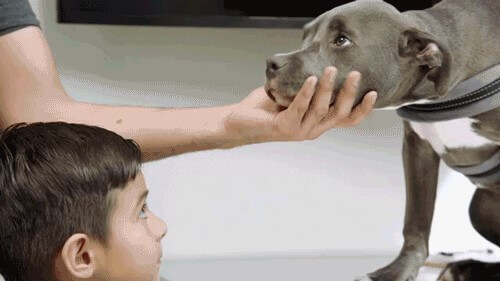 LETS LIGHTEN THE MOOD WITH SOME DOG FUN FACTS

DOG’S CAN OFTEN BE AMAZING IN SO MANY WAYS

Puppies love to play games and hide and seek is one of their favorites,  so hide and then call the puppy’s name so she can try to find you.

Dogs such as Border Collies have learned more than  1000  words.

Big  “helicopter”  tail wagging is one sign of a nice dog.

A stiff, upright,  or rapid tail movement isn’t wagging or  “friendly”  it’s an indication of a dog who’s very excited and focused.

Puppies grow to half their body weight in the first four to five months.

Puppies can then take a year or more to gain the other half of their body weight.

Sleeping 18 to 20 hours is not uncommon for puppies during their rapid body growth phase.

Dogs sometimes appear to smile – like humans – with open mouth grinning.   This can indicate a relaxed,  submissive state,

Puppies get tired and cranky just like little kids.   If you have a fussy puppy,  it may be a good time for a nap.

Greyhounds are the fastest breed of dog and can run up to 44 miles an hour.

There are about 400 million dogs in the world.

The Labrador Retriever is the most popular breed,  according to the American Kennel Club.

It is internationally accepted that there are 339 official dog breeds.

The average dog lives 10 to 14 years,  though there were two cattle dogs in Australia that lived 28 years.

The world’s oldest breed,  the Saluki,  originated in Egypt around 329  B.C.

A study by Cornell University,  dogs were domesticated between 9,000 and 34,000 years ago,  but recent findings have pushed that back to more than 44,000 years.

Thomas Jefferson helped enact a dog tax in Virginia because he was tired of dogs killing his sheep.

Petting dogs and looking into their eyes releases the  “feel good”  hormone oxytocin for both the person and the dog.

Dogs are omnivores  – –  they eat meat,  grains,  and vegetables.

The heaviest breed,  the Mastiff,  weighs around 200 pounds.   The heaviest dog on record also a Mastiff was over 300 pounds.

More than half of all U.S. presidents have owned dogs.

Like human fingerprints,  no two dogs’  nose prints are alike.

The Chihuahua at about 6 inches,  is the shortest breed of dog.

Irish Wolfhounds are the tallest dog breed,  30 to 35 inches tall at the shoulder.

A Russian dog named Laika was the first animal in space orbiting the earth in 1957.

The dogs that bark the most are  Miniature Schnauzers,  Cairn Terriers,  Yorkshire Terriers,  Fox Terriers and, the West Highland White Terrier.

Puppies have 28 teeth and adult dogs have 42.

The best time to bring home a puppy is when their 8 to 12 weeks old. 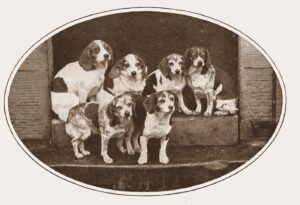 Dogs see the best at dawn and dusk.

Dog’s aren’t colorblind but their eyes don’t have receptors for the color red.   They see in shades of black and white and also in shades of blue and yellow.

New puppies have heat sensors in their noses to help find their moms while their eyes and ears are closed.

The more intelligent dog breeds such as Golden Retrievers,  Labrador Retrievers,  German Shepherds, and Collies are more kid-friendly than other breeds.

A dog’s sense of smell is reduced by up to 40 percent when they are overheated and panting.

Portuguese Water Dogs,  Bichons,  Kerry Blue Terriers,  Maltese, and Poodles are all good choices if you have allergies since they shed less than other breeds.

More than one in three U.S. families owns a dog.

A puppy litter usually has four to six pups.

There are almost 14,000 animal shelters and rescue groups across North America.

In the U.S. service dogs are recognized as  “necessary medical equipment.”

Therapy dogs,  who bring healing to individuals and families by visiting hospitals,  schools,  or retirement homes,  differ from service dogs,  who assist individuals who have disabilities.

The Newfoundland breed has water-resistant coats and webbed feet.

As Disney’s Cruella De Vil was aware,  Dalmatian puppies are born pure white and develop spots as they grow older.

Dogs sweat through the pads of their feet.

Dogs have three eyelids,  including one to keep their eyes moist and protected.

Chow Chows are born with pink tongues,  which turn blue-black at 8 to 10 weeks.

Dogs are pack animals – they don’t like being alone.

In ancient China,  people kept warm by putting dogs up their sleeves.

As a rule dogs who have been spayed or neutered live longer than intact dogs.

A bloodhound named  “Tigger”  holds the record for the longest ears,  each measuring more than 13 inches.

Bingo is the name of the dog on the box of Cracker Jacks.

In 1969,  Lassie was the first animal inducted into the Animal Hall of Fame.

The Alaskan Malamute can tolerate temperatures as low as 70 degrees below zero.

You can lower your blood pressure by petting a dog.

Stray dogs in Moscow have learned to ride the subway to find food.

More than half of all dog owners include their dogs in annual holiday photos.

It was once illegal to keep dogs  as pets in Iceland’s capital city,  but the law has now been relaxed.

President Lyndon Johnson’s beagles were named Him and Her.

One unspayed female dog,  her mate and their puppies can produce 67,000 puppies in six years. 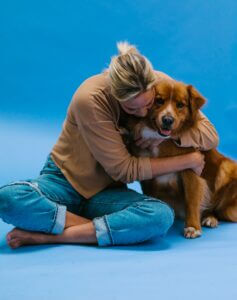 Basenji’s are the only barkless dog.

Dogs are direct descendants of wolves.

At birth,  puppies are blind,  deaf,  and toothless.

Dogs curl up to keep themselves warm and to protect vital organs.

The Norwegian Lundehund is the only dog with six toes on each foot.

Like humans,  dogs can get jealous when their owner displays affection toward someone or something else.

Dog’s can be trained to detect cancer and other diseases in humans.

A dog’s whiskers are used as sensing devices.

Three of the 12 dogs on the Titanic survived.

A puppy reaches full size between 12 and 24 months.

The U.S. has the highest dog population in the world.

Many foot disorders in dogs are caused by long toenails.

The Boy Scouts and Girl Scouts both offered merit badges for dog care.

Paul McCartney of the Beatles recorded a high pitched whistle at the end of  “A Day in the Life” for his dog.

Max,  Jake,  Maggie and Molly are the most popular dog names.

Walt Disney’s family dog – named Sunnee – was the inspiration behind  “Lady and the Tramp.”

A German Shepherd named Orient accompanied her blind owner Bill Irwin as he became the first blind person to through-hike the 2,100-mile Appalachian Trail in 1990.

Chihuahuas are born with soft spots in their skulls,  just like human babies.

Mastiff’s wore armor and were sent after mounted knights in Roman times.

Dogs are mentioned 35 times in the Bible.

Obesity is the top health problem among dogs.

Female dogs carry puppies for about nine weeks before birth.

Dogs are naturally submissive to any creature with a higher pack status.

Dogs can be taught to count and solve simple math problems.

With some patience,  dog’s can be taught to walk backwards,  salute and bow.

Pit bulls have been given a bad rap.  BADRAP was started in the San Francisco Bay area on behalf of  “pit bulls and their owners”  and was ranked nationally as a No. 1 high-impact non profit for animal welfare.

Revolutionary War soldiers sometimes brought their dogs with them into battle.  This was the case with George Washington and his dog,  Sweetlips.

The American Water Spaniel was the first hunting breed developed to retrieve from boats.

There are many more examples of little known dog facts but this should be a good sampler.

YOUR DOG WILL LIVE LONGER 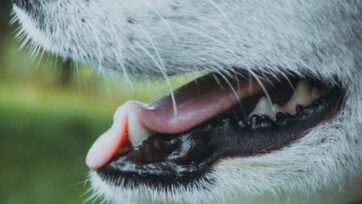