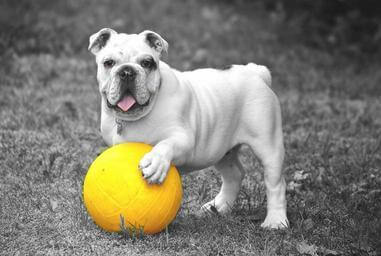 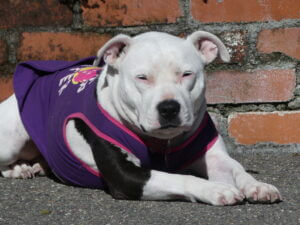 The origin of the Bulldog is closely associated with the Mastiff;  the facts are that originally he was a smaller variety that was used for bull baiting,  the larger variety was used to battle the bear.

The first mention of a Bulldog occurs in 1631 or 1632 in a letter written by Prestwich Eaton of St.  Sebastian to George Wellingham,  London,  asking for a good Mastiff and two good Bulldogs.   The sport of bull baiting was initiated with the disappearance of the wild oxen from the woods in the reign of King John,  toward the close of the twelfth or beginning of the thirteenth century.   We read that:   William,  Earl Warren,  Lord of Stamford, standing upon the castle walls of this town,  saw two bulls fighting for a cow in the meadow.   The butcher’s dog pursued one of the bulls,  which,  startled with the noise and the multitude,  galloped through the town.   This sight so pleased the Earl that he gave the meadows,  called the Castle Meadows,  where first the duel began,  for a ownership to the butchers of the town,  on condition that they find a mad bull six weeks before Christmas for the continuance of the sport every year.

“Bull baiting,”  writes Marples,  “became a very fashionable British sport,  and was at one time patronized by persons of the very highest rank,  from the King and Queen of England down,  just as bull fighting in Spain is still a leading and most popular sport,  in which the matadors take the place of Bulldogs.   As the sport developed and became popular,  naturally the breeding of dogs best adapted for bringing down the bull followed,  and in this way originals of the present-day Bulldogs were evolved,  but of course not so pronounced in type nor so perfectly fitted structurally and anatomically for their specific avocation.   It was no doubt found that a less heavy and more agile dog than a Mastiff would be better for the purpose,  and either smaller specimens would be used or the Mastiff became dwarfed by crossing,  probably with a terrier.   As the bull always attacks his canine foes head down so as to catch them up with his horns,  the dogs would be taught to seize him by the nose,  which indeed would be the natural mode of attack by the dog in such circumstances.   The type of dog that would be shown to the students of the sport,  even in the old days,  would be a low-set,  powerful-fronted and jawed dog,  with the light quarters,  and whose nose receded from his lower jaw to enable him to breathe while hanging on his quarry,  his light hindquarters further assisting him in hanging on the bull,  whose habit in such circumstances invariably is to whirl the dog in the air in his frantic endeavor to shake him off.

Theoretically,  the Bulldog may be anatomically adapted to holding bulls,  but the present show dogs are simply exaggerated versions that by no possible stretch of the imagination could either catch or hold a bull or escape his feet and horns.

The modern Bulldog cannot be accepted as anything more than a conspicuous example of breeding.   They have lost,  however,  none of their old-time courage and tenacity,  and will go to their death as willingly as their ancestors did four hundred years ago.   Bulldogs are not fierce in disposition;  in fact,  they are among the kindest of the canine race,  free from disloyalty,  and the most faithful of companions,  all of which in a great measure accounts for their popularity.

The main points to look for in the selection of Bulldog puppies at from two to four months old and after,  are:   A massive head,  with long,  sweeping underjaw,  we turned up,  but not necessarily short nose,  but must be retrouss’e–laid well back massive,  broad foreface,  big skull,  little ears,  short back and tail,  short legs,  with enormous bone.

The following is the description and standard as approved by the early 1900’s English Bulldog Club of America when the dogs were much closer to the original breeds,  than today.

The perfect Bulldog must be of medium size and smooth coat,  with heavy,  thick-set,  low-swung body;  massive,  short-faced head;  wide shoulders and sturdy limbs.   The general appearance and attitude should suggest great stability,  vigor,  and strength.   The disposition should be equable and kind,  resolute and courageous  ( not vicious or aggressive ),  and the demeanor should be pacific and dignified.   The attributes should be countenanced by the expression and behavior.

The style and carriage are peculiar,  his gait being a loose-jointed,  shuffling,  sideways motion,  giving the characteristic  “roll.”   The action must,  however,  be unrestrained,  free,  and vigorous.

The  “points” should be well distributed and bear good relation one to the other,  no feature being in such prominence from either excess or lack of quality that the dog appears deformed or badly proportioned.

When comparing the dogs of different sex,  allowance should be made in favor of the females,  which do not bear the characteristics of the breed to the same degree of perfection and grandeur as do the males.

The color of the coat should be uniform,  pure of its kind,  and brilliant.   The various colors found in the breed are to be preferred in the following order:    ( 1 )  Red brindle;   ( 2 )  all other brindles;   ( 3 )  solid white;   ( 4 )  solid red,  fawn,  or fallow;   ( 5 )  piebald;   ( 6 )  inferior qualities of all the foregoing.   ( Note.–A perfect piebald is preferable to a muddy brindle or defective solid color. )   Solid black is very undesirable,  but not so objectionable if occuring to a moderate degree in piebald patches.   The brindles,  to be perfect,  should have a fine,  even,  and equal distribution of the composite colors.   In brindles and solid colors a small white patch on the chest is not considered detrimental.   In piebalds the color patches should be well defined,  of pure color,  and symmetrically distributed.

The skin should be soft and loose,  especially at the head,  neck,  and shoulders.

The head and face should be covered with heavy wrinkles,  and at the throat,  from jaw to chest,  there should be two loose,  pendulous folds forming and dewlap.

The skull should be very large,  and in circumference in front of the ears should measure at least the height of the dog at the shoulders.   Viewed from the front,  it should appear very high from the corner of the lower jaw to the apex of the skull,  and also very broad and square.   Viewed for the side,  the head should appear very high and very short from the point of the nose to occiput.   The forehead should be flat   ( not rounded nor ” domed ” ),  neither too prominent nor overhanging the face.

The cheeks should be well rounded,  protruding sideways and outward beyond the eyes.

The temples of the frontal bones should be very well defined,  broad,  square,  and high,  causing a hollow or groove between the eyes.   This indentation or stop should be both broad and deep,  and extend up to the middle of the forehead,  dividing the head vertically,  being traceable to the top of the skull.

The eyes,  seen from the front,  should be situated low down in the skull as far from the ears as possible,  and their corners should be in a straight line at right angles with the stop.   They should be quite in front of the head,  as wide apart as possible,  provided their outer corners are within the outline of the cheeks when viewed from the front.   They should be very round in form,  of moderate size,  neither sunken nor bulging,  and in color should be very dark.   The lids should cover the white of the eyeball when the dog is looking directly forward,  and the lid should show no  ” haw. ”

The ears should be set high in the head,  the front inner edge of each ear joining the outline of the skull at the top back corner of the skull,  so as to place them as wide apart and as high and as far from the eyes as possible.   In size they should be small and thin.   The shape termed   ” rose ear ”  is the most desirable.    The  ” rose ear ”  folds inward at its back lower edge,  the upper front edge curving over,  outward,  and backward,  showing part of the inside of the burr.    ( The ears should not be carried erect or  ” prick-eared ” or  ” buttoned, ”  and should never be cropped. )

The nose should be large,  broad,  and black,  its ti being set back deeply between the eyes.   The distance from the bottom of stop between the eyes to the tip of the nose should be as short as possible,  and not exceed the length from the tip of the nose to the edge of under lip.    The nostrils should be wide,  large,  and black,  with a well-defined line between them.   ( The parti-color or  ” butterfly nose ” and the flesh-color or ” Dudley nose ” are decidedly objectionable,  but do not disqualify for competition. )

The chops or  ” flews ”  should be thick,  broad,  pendant,  and very deep,  completely over-hanging the lower jaw at each side.   They join the under lip in front and almost cover the teeth,  which should be scarcely noticeable when the mouth is closed.

The jaws should be massive,  very broad,  square,  and  ” undershot, ”  the lower jaw projecting considerably in front of the upper jaw,  and running up.

The teeth should be large and strong  with the canine teeth or tusks wide apart,  and the six small teeth in front,  between the canines,  in an even,  level row.

The neck should be short,  very thick,  deep,  and strong,  and well arched at the back.

The shoulders should be muscular,  very heavy,  wide-spread,  and slanting outward,  giving stability and great power.

The chest should be very broad,  deep,  and full.

The back should be short and strong,  very broad at the shoulders and comparatively narrow at the loins.   Behind the shoulders there should be a slight fall in the back,  close the top of which should be higher than the top of the shoulders,  thence curving again more suddenly to the tail,  forming an arch   ( a very distinctive feature of the breed ),  termed  ” roach-back, ”  or,  more correctly,  ” wheel-back. ”

The forelegs should be short,  very stout,  straight,  and muscular,  set wide apart,  with well-developed calves,  presenting a bowed outline,  but the bones of the legs should not be curved or bandy nor the feet brought too close together.

The elbows should be low and stand well out and loose from the body.

The hindlegs should be strong and muscular and longer than the forelegs,  so as to elevate  the loins above the shoulders.   Hocks should be slightly bent and well let down,  so as to give length and strength from loins to hock.   The lower leg should be short,  straight,  and strong,  with stifles turned slightly outward and away from the body.   The hocks are thereby made to approach each other and the hind feet turned outward.

The feet should be moderate in size,  compact,  and firmly set.   Toes compact,  well split up,  with high knuckles,  and with short and stubby nails.   The front feet may be straight or slightly out-turned,  but the hind feet should be pointed well outward.

The tail may be either straight or  ” screwed ”   ( but never curved or curly ),  and in any case must be short,  hung low,  with decided down-ward carriage,  thick root and fine tip.   If straight,  the tail should be cylindrical and of uniform taper.   If  ” screwed, ”  the bends or kinks should be well defined,  and they may be abrupt and even knotty,  but no portion of the member should be elevated above the base or root.

Tags: Your Dog Can Be Made Up Of Many Breeds
Previous Post

SIGNS OF LIVER DISEASE IN YOUR DOG